Working to exact measurements, a fast-track construction programme, unprecedented rainfall, operating within 100 metres of a premier Sandton Hotel and having two tight site boundaries are a few of the challenges faced by leading building contractor, Murray & Roberts Buildings, on its contract at 135 West Street in the heart of Sandton.

The seven month contract will see Murray & Roberts Buildings convert an existing office block into a 218 room luxury hotel. A fifth floor will be constructed on top of the existing structure of four concrete floors. The basement will remain but will be refurbished accordingly.

While plans for the development were in the process of being finalised Murray & Roberts Buildings carried out demolition work. This comprised the stripping of all existing finishes and external brickwork. This demolition work was carried out over weekends to limit disruptions to surrounding hotels, clinics, and office blocks as the project site is located in a high-traffic area.

“In addition, there is less foot traffic through the area during the weekend and this was also an important consideration for us from a safety point of view,” explains MacDonald Ngobese, site agent at Murray & Roberts Buildings.

The additional fifth floor will be constructed using structural steel and will have a soft roof to mitigate weight and associated load bearing issues on the existing structure.

Ngobese explains that this method of construction is quicker and will assist in the management of project time constraints. “As there are no concrete columns being installed on the fifth floor there is also no time needed for the curing of concrete either,” he points out.

Furthermore, in terms of reconstruction work, two new lifts will be installed and the hotel will feature a state-of-the-art reception area featuring a triple-volume chandelier and an adjacent lounge area. The scope of work includes all new structural works and adjustments to existing concrete work as well as new brickwork, dry-walling, plumbing, electrical reticulation and the installation of high-end finishes.

Ngobese explains this particular building contract requires a dynamic approach to its construction programme. “Our experience and ability to execute plans quickly and efficiently have been vital to the challenges encountered on the project site. While maintaining a fluid approach to our fast track construction programme, we need to be adaptable to achieve appropriate solutions.”

An example of this fluidity and adaptability can be illustrated when the construction team cut an opening for tanks and boilers in an existing concrete slab covering the existing basement. The slab was post-tensioned and cutting through it could not be approached as a simple cut. Murray & Roberts Buildings used a methodology that facilitated the de-stressing of the cables before the cut. The cut itself also changed the integrity of the slab and its load capacity. This was adjusted accordingly before the slab was re-stressed.

One of Murray & Roberts Buildings’ most significant challenges on this contract is managing the flow of both pedestrians and vehicle traffic in and around the project site.

Before site activities began Murray & Roberts Buildings established channels of communication with the nearby Michelangelo Hotel, as well as Citibank and the Sandown Clinic. These three buildings border the construction site so it was necessary to discuss the project timeline and the exact nature of activities that would be taking place as well as the areas nearby the building site that could be affected.

To facilitate materials handling activities on the project, Murray & Roberts Buildings was granted two way leaves from the Johannesburg Roads Agency for a piece of road where its site crane is located as well as another area for deliveries to site.

“When we have large volume deliveries, we are able to close the access road to West Street and make the dual entrance lane a two-way street,” explains Ngobese.

To negate any adverse disruption to peak hour traffic, the access road is not closer after 16h45. The Sandown Clinic also allows the building contractor the use of its service entrance for concrete deliveries.

Working in an existing building brings its own challenges. To ensure perfect room measurements, including those of the bathrooms and bathroom components, the Murray & Roberts Buildings team is using steel templates to outline a series of rooms in a fraction of the time it would take a team using traditional measurement tools. “We’re also using sub-frames for all the openings in the external façade to ensure they are millimetre perfect and consistent,” states Ngobese.

A further time saving measure is the use of prefabricated plumbing systems which arrive at the building site with all the required back-to-back piping already connected in a sub-frame.

“These are positioned, the concrete poured into the cage and then the surrounding brickwork commences,” outlines Ngobese. All these methods have collectively saved the construction team a tremendous amount of time.

The use of innovative alternative methods of construction has enabled Murray & Roberts Buildings to increase its productivity on the build. An example of this is the use of plastic shuttering as opposed to the traditional steel or timber materials. “This allows a team of two to manoeuvre the shutters around instead of a team of six, allowing us to allocate our teams more effectively on the project,” points out Ngobese.

A standout feature of this building contract is its acoustic requirements. This comprises acoustically designed partitioning, cavity back walls, plumbing and power reticulation systems.

“We have a completed a showroom where we can test all the construction elements which also include the window frames, doors, plug points, cabling conduits, ceilings and carpets to achieve our limit of 50 decibels,” explains Ngobese.

Murray & Roberts Buildings has a focused approach to safety on all its projects. Ngobese explains that all 23 sub-contractors conduct their activities in line with Murray & Roberts’ Stop.Think.Act.24/7 safety policy.

This safety strategy extends to the areas surrounding the project site where there is pedestrian foot traffic, and the entire external façade of the building is surrounded by scaffolding covered with net to prevent objects falling into the public thoroughfares below.

In line with its commitment to environmental stewardship, the company also minimised the amount of airborne dust on the construction site during demolition activities. This was done by wetting rubble and keeping it moist by covering it with shade net prior to mechanical removal.

“At the end of every day we make sure that all of the surrounding streets and pavements surrounding our construction are swept clean as an extra measure to safeguard the public,” highlights Ngobese.

Construction activities are scheduled for completion in April 2017.

Murray & Roberts Buildings is a division of Murray & Roberts Construction which is being purchased by a consortium led by the Southern Palace Group of Companies and which will create the first major black-owned infrastructure and building construction business in South Africa. 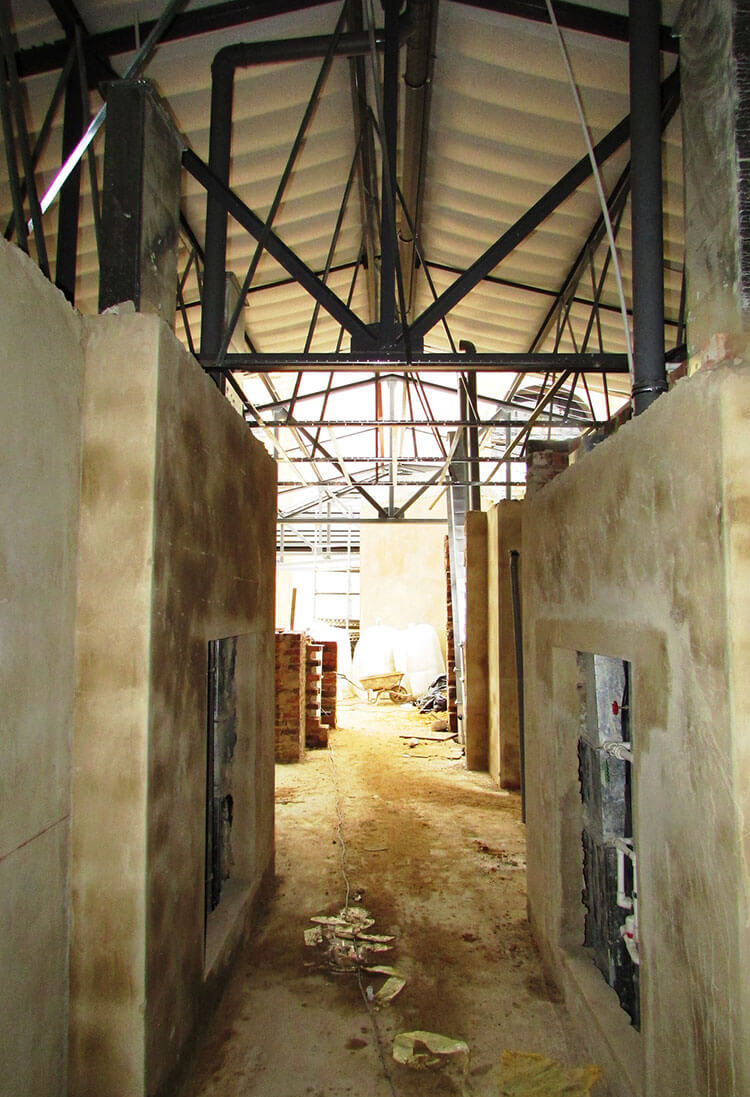 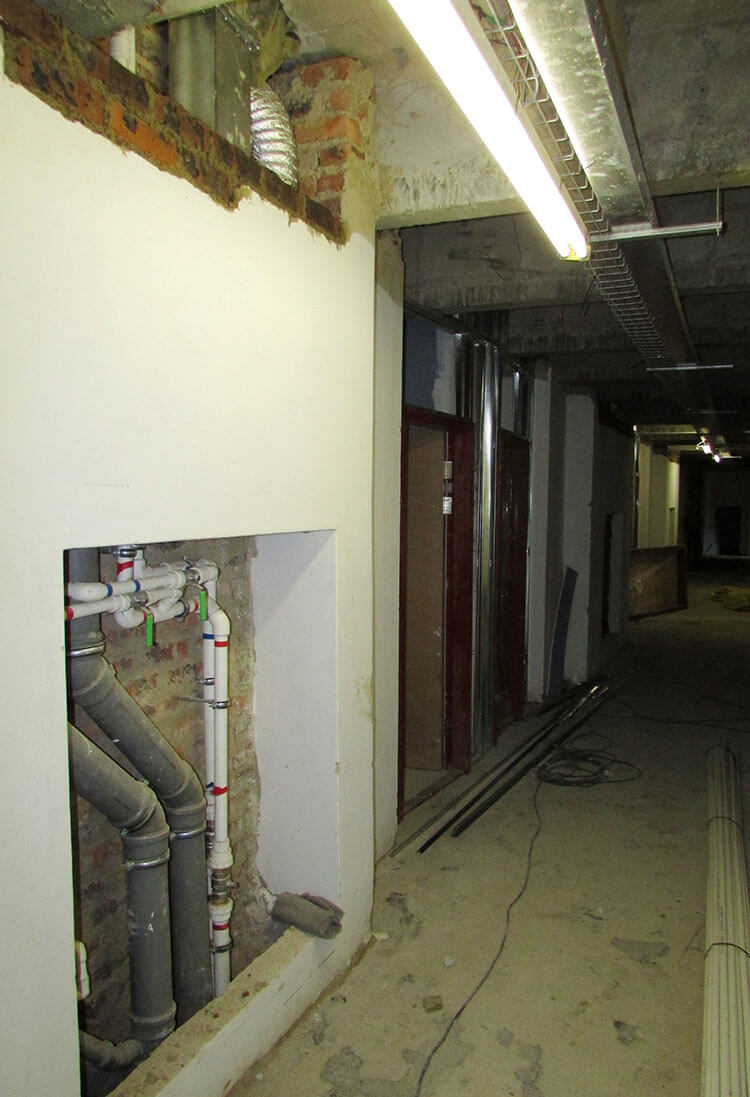