Piling for the eight-storey block began in May 2021, marking the start of a one-year building programme, according to Mark Schonrock, property development manager at Concor. Paarl Rock will comprise 266 architecturally designed apartments in an affordable model for first-time home owners.

The block is underpinned by 158 continuous flight auger (CFA) piles, which present a quicker solution than bored or driven piles. With depths of 8 to 11 metres, the piles could be completed in just three weeks, Schonrock says, improving the pace of the project.

“We have also installed two tower cranes – a 55 metre jib and a 45 metre jib – to facilitate our programme of work,” he says. These will lift and move concrete for vertical columns, as well as reinforcing bars for slabs and columns, and all formwork around the site.

Horizontal concrete slabs will all be post-tensioned, a current efficiency trend which reduces the amount of costly rebar required. The planned slab thickness has also been slightly reduced, from 285 mm to 255 mm. While a relatively small reduction, this will allow a saving of some 450 m3 of concrete over the planned area of 15,000 m2 of slab work.

“Pouring of slabs will be conducted by a truck-mounted boom placer, which enhances construction efficiency especially where large continuous pours of 200 to 220 m3 are required on this project,” he says.

The Paarl Rock block will include ground floor retail space, two lifts and a roof top deck on the sixth floor looking westwards at Devil’s Peak and over the Cape Town central business district towards Signal Hill. To minimise the cost of long-term maintenance on the outside walls, the design makes use of face brick – but with a difference.

“Different colours and shapes of face brick have been specified to create texture and variety in the façade,” he explains. “Patterns are also created with rustication, using bricks of different shapes or with varied orientation.”

A perforated design is also used for the brick walls in front of drying yards, letting through light and air while also giving an attractive texture to the building façade. The laying of face bricks requires a somewhat elevated level of skill and attention, and also takes longer, so the best artisans are put onto the rustication work.

Schonrock notes that Cape Town still offers a good pool of bricklaying skills, but the long period of depressed conditions in the sector is going to be felt in skills supply as building activity improves. As part of its corporate contribution to skills development, Concor conducts a range of training on its Conradie Park site.

“Through the National Youth Service programme, for instance, we are training six local bricklayer learners,” he says. “Beginning in November 2020, they completed a six-month training course and were then placed with selected sub-contractors to work on the current project.”

Paarl Rock’s innovations include an energy-efficient hot water system for residents, lowering their cost of living and taking load off the national grid.

A centralised hot water generation system on the ground floor raises the upfront cost but provides many long-term benefits to users. An on-roof solar generator will assist in ‘over-heating’ water during the day in a specially-designed storage vessel to around 85 to 90 C.

“Tapping into off-grid power in this way means that residents can save on what they pay in water-heating bills,” he says.

The development is also conserving water and reducing water costs by supplying its own irrigation needs from a master incoming line of treated effluent – at just five to 10% of the cost of potable water. The water quality from this line, which is clean enough to be discharged into river systems, is further treated on site and also used for all irrigation and cleaning purposes.

Concor has been on site at Conradie Park – where the old Conradie government hospital closed about a decade ago – for about two and a half years, preparing the infrastructure for the developments.

Roads have been installed, along with stormwater drains and a dedicated sewage reticulation system. A pump station was installed to move sewage over the Elsie’s River canal to the main Athlone sewer system and three new electrical substations were constructed.

The Conradie Better Living model is one of seven ‘game changer’ projects which has been prioritised by the Western Cape Government. This aims to improve the lives of citizens through the Finance Linked Individual Subsidy Programme, providing affordable housing situated near the city’s main arterial routes and job opportunities. 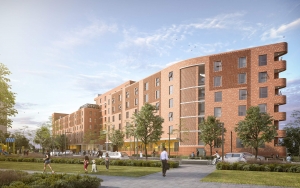 An artist’s impression of the majestic block that anchors the development. Current rental stock units being constructed, gearing up for first tenanting towards the end of this year. 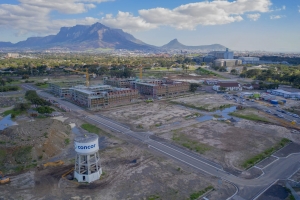 A view of the overall site with roads and bulk services installed. 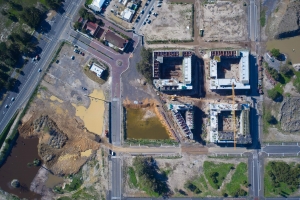 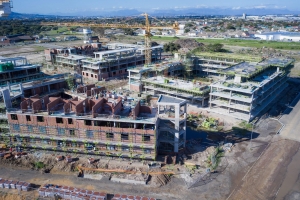 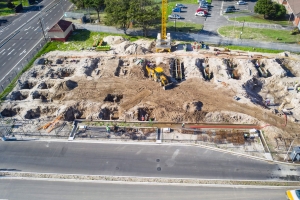 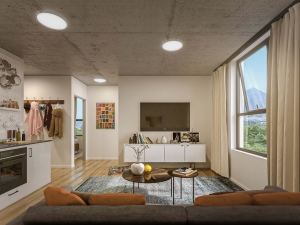