Anglo American’s Mogalakwena open pit PGM mine, the largest in the world, has excelled in growing its annual production performance year-on-year. This can be attributed to various optimisation efforts on site, as well as the steady performance of its Zwartfontein pit thanks to contractor Concor Opencast Mining.

The majority of Mogalakwena’s production originates from the Central, North and South pits, supplemented further by the nearby Zwartfontein pit. Together they should deliver on Anglo American Platinum’s record-breaking production target of 1.22 Moz of PGMs for 2019.

While the three main production pits are operated by the mine’s personnel, it relies on a contractor for the smaller Zwartfontein pit which requires an earthmoving fleet suited to its smaller size and production targets. Despite its size, it is an important contributor to Mogalakwena’s annual performance.

A year and nine months ago the pit underwent a significant transition, which saw Concor Opencast Mining secure the load and haul contract from its previous operator. “Because the mine required a smooth changeover with minimal disruption to production, we took over most of the previous contractor’s fleet, as well as its entire workforce,” says Concor Opencast Mining’s Zwartfontein contracts manager Donald Sisiya.

Having completed work at Mogalakwena’s tailings storage facility in the past, Concor Opencast Mining brought to the project not only an existing relationship with the mine but its solid reputation for mining opencast, hard rock PGM operations in South Africa. “Combined with our cost competitive offer, the mine placed its faith in our ability to deliver a seamless transition and then to further optimise production without disrupting day-to-day running during the changeover period,” Sisiya continues.

Concor Opencast Mining’s contract at Zwartfontein comprises a three-year load and haul contract, as of 1 December 2017. Over this period, it must move 32.4 million tons of material, and more specifically 12 million tons of ore and 20 million tons of waste material.

With an effective change management structure in place, Concor Opencast Mining has improved the pit’s production performance, having revised the shift structure for all +100 of its employees.

The company has also invested significant capital into upgrading most of the old earthmoving equipment on site which had not been properly maintained. “We have over recent months added three 130 ton excavators to the pit, over and above introducing 10 new 100 t trucks as well,” Sisiya states.

Moving forward, Concor Opencast Mining has production targets to meet by the end of the year and Sisiya is confident of achieving these. “Taking over an existing contract while ensuring minimal impact to the employees and the production targets is a success story for the company which highlights our strong capabilities in the opencast mining space,” Sisiya ends. 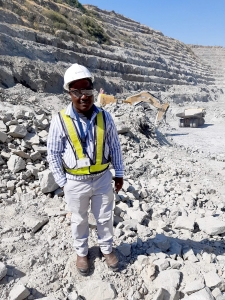 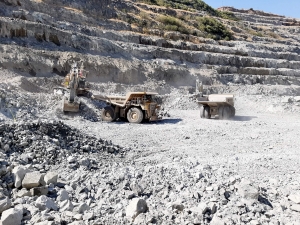