The elegant Illovo Central mixed-use block near Sandton being constructed by Concor Buildings has topped out at 15 floors and is due for completion in March next year.

In a format driven by developers FWJK and increasingly popular in South Africa’s urban designs, the building will be a combination of office space and residential units. With parking taking up levels 1 to 5, there will be offices on floors 6 to 8 and apartments from floors 9 to 15. The living units are a combination of sizes including 80 studio apartments, 36 one-bedroom units, 43 two-bedroom units and 12 three-bedroom penthouse apartments.

Bulk earthworks began in May 2018, when 27,800 m3 of spoil was removed for the first three levels. According to Concor Buildings contract manager Fanie Stadler, this phase required the removal of considerable quantities of rock. In the southern corner of the property, the rock layers almost protruded at ground level.

Given the close proximity to other buildings in this well-developed suburb, Concor Buildings conducted smaller, controlled blasts to ensure the highest levels of safety. The planning and monitoring of these blasts also considered a Gautrain servitude tunnel below, and a school across the road.

“Dust control was also a key issue, which we implemented and monitored closely in line with our stringent health and safety standards,” Stadler says.

The concrete structure has been built around a lift core for four passenger lifts and a fireman’s lift. Two tower cranes have been a feature of the skyline on this project, improving efficiencies on a site that is severely space-constrained. One tower crane with its 60 m jib has focused its lifting on horizontal decking, while the other with 55 m jib provided additional hoisting for column and the shaft core formwork and concrete.

An interesting innovation that Concor Buildings has applied in constructing inner walls has been the use of Everite Hebel autoclaved aerated concrete (AAC) blocks. This lightweight building block has a number of benefits for modern buildings, Stadler says.

“The lighter load on the concrete slabs means that these slabs can be designed slightly thinner and with less reinforcing bar,” he says. While a typical brick and mortar wall is about 350 kg/m2, an AAC block wall load is closer to 90 kg/m2.

The uniform surface of an AAC wall also allows for a thinner skim coat finish, rather than the usual 12 mm of mortar required for a normal brick wall. This has positive material and logistical implications as less water, sand and cement need to be transported to and around the site. There is also mixing of mortar on site which makes for a generally cleaner site, with less dust.

Stadler highlights that the inclusion of AAC blocks has allowed Concor Buildings to demonstrate its building expertise and precision, while also further developing the skills of its subcontractors.

“With the benefits of these lightweight blocks come the demands of accuracy and attention to detail,” he says. “Added skill is required in the block laying, as well as in the plastering.”

As part of Concor Buildings’ development programme, the company worked with the block supplier to train and mentor subcontractors in working smarter and enhancing their skill levels with new techniques. This delivered the exact tolerances demanded to closely match the building’s structure with the blockwork and the glazing.

The performance glass on the outside of the building is low-e, reflecting long-wave infrared energy to keep the inside of the building cool and reduce load on the air conditioning system. A Marmoran wall coating is applied as a protective and aesthetic layer.

As with many developments in dense suburban areas, space to work has been at a premium at Illovo Central. The site office has even had to move into the building itself.

The project’s location on Rivonia Road has demanded meticulous coordination of materials delivery by Concor Buildings, while council bylaws have meant no overtime can be worked in the suburb. The construction team has therefore had to maintain tight working efficiencies to keep the project on track. 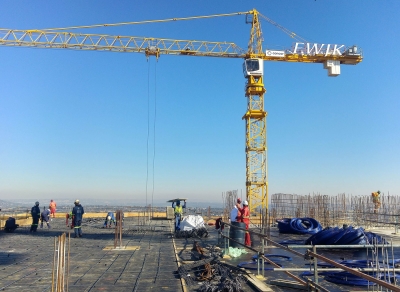 Reinforcing is prepared for the slab on the final floor of the Illovo Central mixed-use block near Sandton. 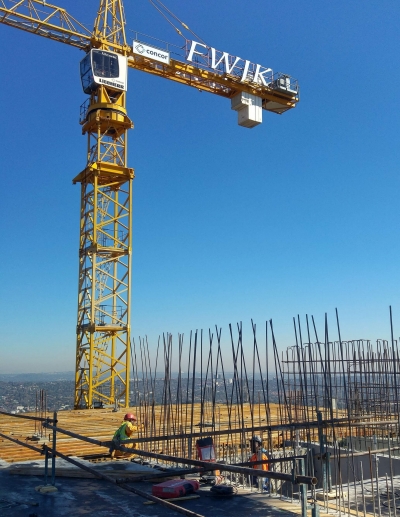 The core of the Illovo Central building – for the lift shafts – emerges at the top floor of construction. 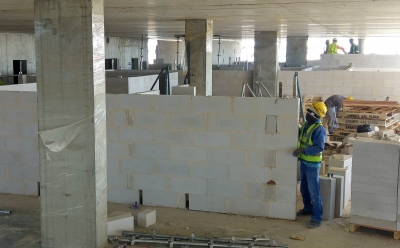 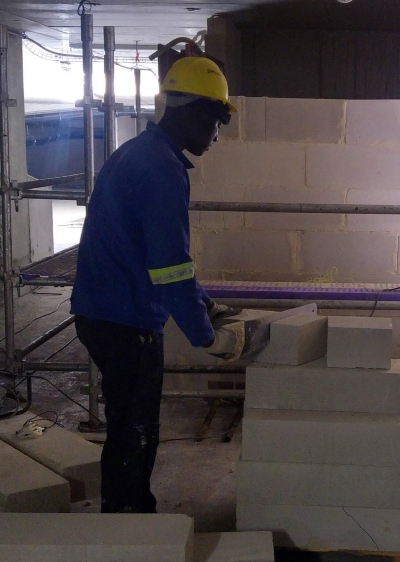 One of the benefits of using AAC blocks is that they can be easily cut to shape with a handsaw. 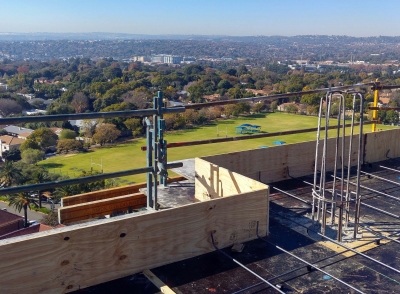 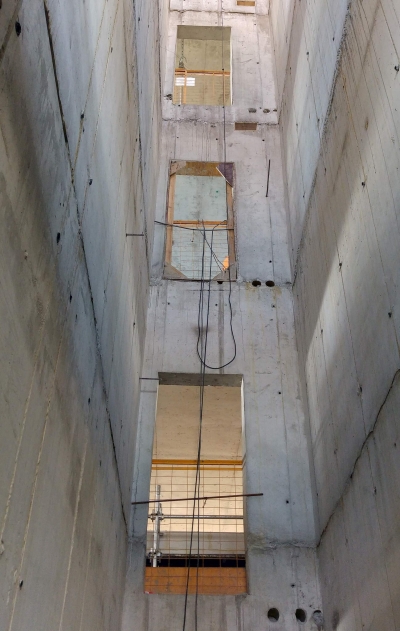 At the core of Illovo Central’s construction is the concrete column containing the lift shafts.