The CME JV (Concor – MECSA Construction Joint Venture) has achieved yet another safety milestone on the iconic Msikaba Bridge project, recording 2,5 million Lost Time Injury (LTI) Free hours on 24 May this year, notched up over a period of just over 1 000 days.

“This is a fantastic achievement by the JV team, given that this an extremely challenging project which involves working at extreme height and in excavations up to 20 m deep, often in very confined conditions. There is also a need for blasting, which, of course, comes with its own risks which have to be very carefully managed,” comments contracts director Laurence Savage.

He adds that some of the structures use High Density Reinforced Concrete, which places demands on the construction teams, and that the scope of the JV’s work also includes a substantial bulk earthworks operation for the construction of the approach roads, with a dozen large earthmoving machines handling cut-to-fill activities.

“We’re extremely proud to have reached this safety milestone and everyone on site deserves to be congratulated on this impressive performance,” he says.

Savage stresses that safety is a core value for the JV partners. “There is nothing more important than ensuring that our people work on a safe site and that they return home every day unharmed. The importance of safe practices is ingrained in every worker on site and we all understand that the goal is ‘Zero Harm’. The safety culture is underpinned by Concor’s ‘Stop. Think. Act’ awareness philosophy and our ‘Care’ value – Care for one another, Care for yourself and take Care in the environment you are working in.”

The workforce participates every day in a morning briefing, which reviews the day’s tasks and how they are to be accomplished safely. A half-an-hour later there is a daily management meeting, where the managers report on and review all safety matters.

According to Savage, the JV understands the role of management as custodians of the safety culture and implementers of a safety culture. “This is the principle of Visible Felt Leadership, he states. “How we act, re-act and manage ourselves has a direct impact on how our people working on the project, take decisions, prioritise and act. This leadership from management allows employees at all levels to understand and ‘feel’ the importance that is attached to safety. No one is left in doubt that working safely is a non-negotiable principle.”

The Msikaba Bridge project forms part of the new N2 toll road between Port Edward and Umtata in the Eastern Cape. A 580 m long cable-stayed structure, it will span the spectacular 198 m deep Msikaba Gorge – making it one of the highest bridges in Africa – and forms part of the N2 Wild Coast project being undertaken by the South African National Roads Agency Limited (SANRAL). It includes two pylons that will stand 128 m high on each side of the gorge. These support the bridge deck using a network of 34 cable tendons strung through their upper reaches.

The JV team has now embarked on the most difficult phase of the project – construction of the pylon superstructure (which will entail working to the 128 m height of the pylons) and the deck segment lifting activities that will result in the north and south banks being connected mid-span across the gorge. Complicating the work is the exposure to severe winds, which can gust at nearly 100 km/h at the site. These two major construction activities will be taking place simultaneously, being the completion of the pylon build, while the deck launch commences.

“These activities are requiring the highest levels of risk management to be undertaken on a mega- construction project,” says Savage. “Everything will obviously be pre-planned to the last detail and we’re confident that our intensive preparations will allow the work to be accomplished safely and further extend the project’s excellent safety record.” 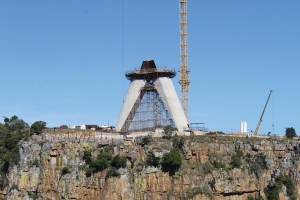 The Concor–Mota-Engil Joint Venture achieved another safety milestone on the iconic Msikaba Bridge project, recording 2,5 million Lost Time Injury (LTI) Free hours on 24 May 2022, notched up over a period of just over 1 000 days. 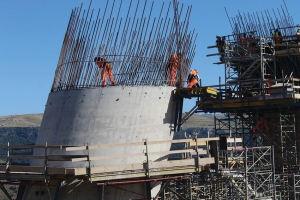 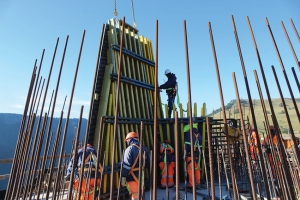 Some structures use High Density Reinforced Concrete which places additional demands on the construction teams. 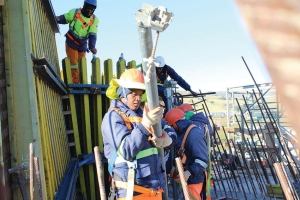 The importance of safety practices is ingrained in every worker on the Msikaba Bridge project. 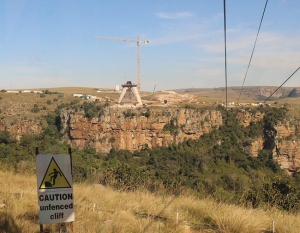 The Msikaba Bridge project forms part of the new N2 toll road between Port Edward and Umtata in the Eastern Cape. 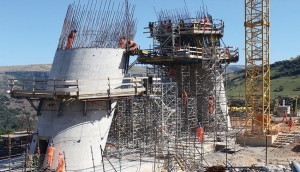