Cape Town has just seen the successful completion by Concor of the tallest residential block in the city area – fronted by a carefully preserved, century-old façade onto one of the trendiest streets in town.

The 16 On Bree project is remarkable not just for its size – it transforms an old two-storey block into a modern 38-floor luxury development – but its complexity. According to Concor Western Cape senior contracts manager Collin Morilly, an early challenge was the preservation of the fragile heritage façade.

“The 16 metre high wall was built not of concrete but of rock, clay and lime, so it needed very gentle treatment and firm support,” says Morilly. “We erected a specially designed structural steel brace that would support the wall and prevent any structural failure while it was cut free from the rest of the building, which had to be demolished.”

A concrete ground beam was also cast along the base of the façade to act as a counterweight and prevent any movement. As the new structure was built, it was stitched in with the braced façade until finally the brace could be removed. There were also three other heritage walls within the building – standing in a U-shape – which were preserved during the construction process.

“The project also had to be implemented in the highly space-constrained city centre, with busy roads on all boundaries of the site,” he says. “This meant there was almost no laydown area for materials and equipment, and we had to ensure an uninterrupted flow of vehicular and pedestrian traffic.”

This was a significant achievement given the scale of the project, which consumed 21,000 m3 of concrete, 1,650 tonnes of reinforcing bar and 650,000 bricks. The new height of the building required the placement of 40 concrete foundation piles. Tower cranes had to be carefully managed to lift and place materials, a task made more difficult by the high winds for which the Cape is known, especially in summer.

“Then came the unexpected disruption of work due to the Covid-19 pandemic,” he says. “We were soon able to get back to work after the initial lockdown, but this required extra vigilance and discipline because of the number of workers in such a confined space.”

Having about 900 people on a relatively small footprint over multiple floors meant that Covid-19 protocols had to be strictly implemented, based on a thorough understanding by all employees and subcontractors of the infection risks.

“Social distancing was a particularly onerous aspect for us to adhere to, as the nature of construction demands that workers operate in teams and groups,” he says. “For example, a team of tilers must work in an apartment together, but the regulated social distance must be observed. This required that fewer workers be allowed into an area, which reduced overall productivity.”

Nonetheless, work proceeded apace to roll out the apartments efficiently and to the highest standard of workmanship. Drawing on the expertise of its trusted subcontractors, Concor’s experienced supervisors kept a close eye on the pace and quality of work, with at least four foremen looking after each floor.

“We run our projects according to our SANS 10400 and ISO 9001 accreditation, and this means close management of the quality assurance and quality control process,” says Morilly. “Our systems included the SnagR snagging software to accurately record and close out snags timeously, and the Synergy document control software to facilitate timeous issue of information, tracking and recording.”

The Finishes Matrices system was also employed, indicating the level and the apartment in which each of the trades should be working every day.

The result has been an elegant structure gracing Cape Town’s city skyline, rising 120 metres from street level and comprising 380 upmarket apartments. The future may hold scope for further residential units, making use of space currently used for the parking areas. To make this possible, the parking floor-to-ceiling heights were designed to the same dimensions – 2,9 metres – as the apartment levels. 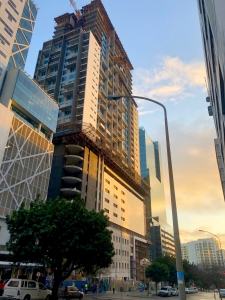 The highest residential block in Cape Town’s city centre – 16 On Bree – during construction. 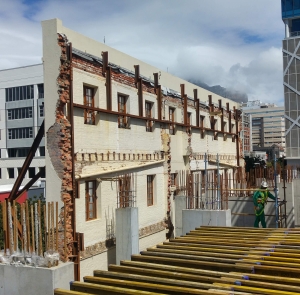 Viewed from inside the site, the specialised steel bracing is visible on the 200-year-old façade wall that has been preserved for heritage. 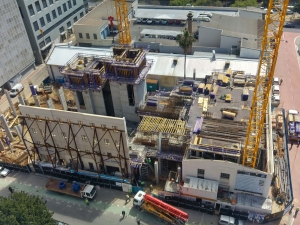 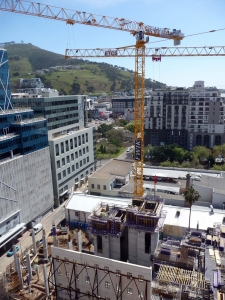 Among the spectacular skylines visible to many 16 On Bree residents will be Signal Hill. 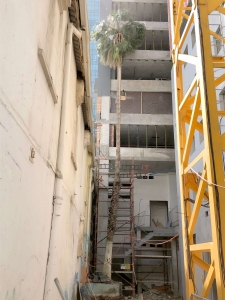 The concrete lift shaft leads the way towards the ultimate height of 120 metres – soon to make 16 On Bree Cape Town’s highest residential building. 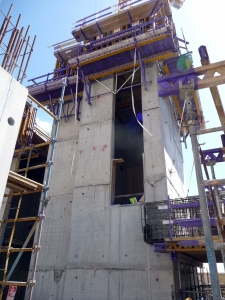 The 150 year old palm tree which was preserved during construction and incorporated in the new build. 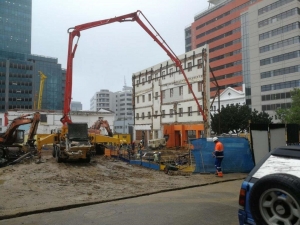 Construction activity on the inside of the heritage façade. The façade was later stitched into the new build. 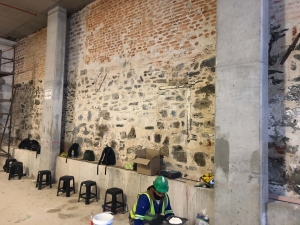 Showing the heritage façade incorporated in the new build. 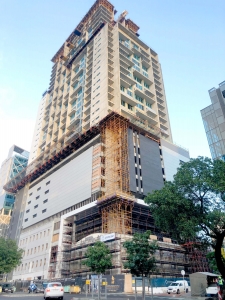 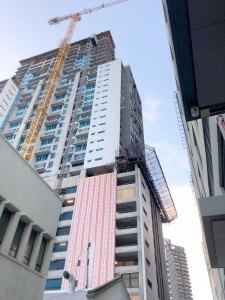 Construction on the 16 on Bree project ramped up again under the Level 3 State of Disaster regulations.