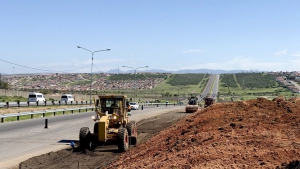 Safety of both pedestrians and motorists has been boosted by Concor Infrastructure’s rehabilitation of the R75 double-carriageway between Port Elizabeth and Uitenhage, while the project has had considerable positive spinoff for local small targeted enterprises.

The project, which began in May 2017, includes the implementation of various road safety measures on Section 1 – which stretches for 13 kilometres – of this well-used national route. According to South African National Roads Agency SOC Limited (SANRAL), between 6 100 and 7 100 vehicles travel northbound on this route each day, including about 500 trucks. At the same time, over 4,500 pedestrians use the road, almost half those being children. Previously, the road used to have some of the highest pedestrian accident numbers in the Eastern Cape.

Concor Infrastructure’s site agent on the project, Roy van Leeve, says there will be a total of some 70 to 80 small targeted enterprises working on the contract over its duration. Among the sub-contracting opportunities from the project have been the relocation and installation of traffic signals, the accommodation of traffic, construction of lane widenings, installing sub-soil drains, guardrails, gabions, precast retaining walls and anti-climb fencing.

He highlights the support structures that Concor Infrastructure puts in place to transfer skills to the targeted enterprises. These assist these small contractors to build their capacity to become sustainable businesses.

“Our engineers on site have each been allocated a number of targeted enterprises to supervise and mentor,” he says. “Many of the newer subcontractors have not had to operate on our level of professionalism before, so they undergo a considerable learning curve when it comes to dealing with quality systems, or health and safety. We work with them to put various systems in place in their own businesses, so that they are able to operate more independently from us when they move off site.”

Each of the small targeted enterprises receives hazard identification and risk assessment (HIRA) training, as well as training on construction regulations and legal liability which they can apply to their own business operations. The mentoring role includes training the targeted enterprises in planning of activities, in generating daily costings, and in the procurement of their materials.

Another important aspect of each targeted enterprise’s development is that they will invariably leave the contract with a higher Construction Industry Development Board (CIDB) grading than they were on when they started work on the project. “If a sub-contractor with a Level 2 CIDB grading gets work with us, the contract is set up so that they will progress to a Level 3 grading by the time they complete their work here,” he says. “This is all part of the major developmental agenda that is in place on this project.”

Another important aspect of the work that will benefit local targeted enterprises is the street lighting component, which is rolling out new street lights along the full length of the rehabilitated roadway. This involves the installation of about 25 km of electrical cabling, which will be encased in concrete.

“This activity has been set aside for women labour, including the complete trench excavations as well as the encasement and backfilling,” van Leeve says.

As part of the local empowerment focus of the project, labour was recruited from the nearby residential wards to ensure that employment and skills training benefits were shared with local communities.

The current phase of the contract is due for completion in 2019.

By completion, Concor Infrastructure’s rehabilitation on this section of the R75 will have involved 15,000 cubic metres of fill, from both commercial sources and from bulk excavations on site.

A cement-stabilised sub-base layer – amounting to 56,000 cubic metres in volume – was applied to sections of the road, consuming 2,600 tonnes of AfriSam Roadstab. For the surfacing, about 93,000 tonnes of asphalt is being supplied by a Port Elizabeth-based supplier.

As an important part of the safety-enhancing features of the work, there will be 45 kilometres of guardrails and 18 kilometres of anti-climb fencing along the route.

Concor Infrastructure’s commitment to safety is reflected by the achievement of 550,000 Lost Time Injury Free (LTIF) hours by the end of September 2018. High quality work is ensured by close monitoring and supervision, carried out through daily inspections and weekly audits. This has led to consistent client audit results on site of between 96 and 98{6b82b7f0f594a4b6f07752448473351ced4f9298427ff8185ed857131ebc6ac4}.

Ongoing skills development includes the opportunity for 10 civil engineering students to gain work experience on site, benefiting from the mentorship of Concor Infrastructure engineers while undergoing experiential learning in fields such as construction management and survey.