Concor at the heart of Cape Project to Improve Lives

Concor is taking a leading role in one of the Western Cape’s most important and innovative public-private urban developments aimed at improving the lives of residents.

The Conradie Better Living Model Gamechanger project – located on the 22 hectare site of the former Conradie Hospital near Pinelands, Cape Town – will be a residentially-led, mixed-use neighbourhood.

Concor will execute the full development of the project. This includes all town planning, detailed designs, sales and marketing, funding, construction and handover to end-users. This multi-million rand initiative is being developed as a partnership between the Western Cape Government, the City of Cape Town and the private sector.

The core of the development is between 3,500 and 3,600 housing units, of which about 1,760 will be grant-funded, affordable units. The initiative will provide affordable housing – reasonably close to Cape Town’s central business district – for families earning between R3,500 and R22,000 per month.

Sports facilities, a community hall and school for 1,600 learners are on the plans, as well as up to 60,000 m² of commercial space and 15,000 m² of retail space. A three-star or four-star business hotel, with 160 rooms and 500 m² of conferencing facilities, is also planned.

The town planning scheme also incorporates substantial green belt areas with recreational facilities. The bulk of the zoning is MU2 (a category of mixed use in the Cape Town zoning scheme). The development framework and rezoning has been finalised and approved, and the precinct plans are currently underway.

An important benefit of the site – which is to the west of Thornton and north-east of Pinelands – is its proximity to public transport. It is within walking distance of both the Mutual and Thornton railway stations.

Although this is outside the control of Concor, there is also the potential for expanding other public transport modes, such as the MyCiti bus service into the area surrounding Conradie. It is hoped good access to public transport will make residents less reliant on private vehicles. The site will also have interconnected footpaths and cycling infrastructure as part of an integrated non-motorised transport plan for the area. 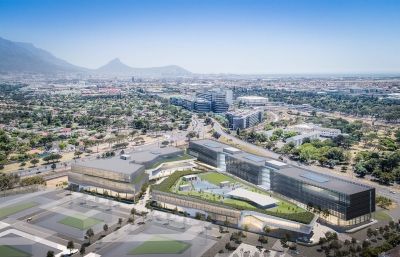