Concor at the forefront of ‘Green’ Construction

When it comes to care for the environment, there can be few contractors around with the track record of Concor, which has shown its commitment to ‘green’ construction on literally scores of building, construction and civil engineering projects, some of which have won top industry awards.

“Our excellent track record is not a matter of chance,” says Bruce Paul, group environmental manager at Concor. “Care for the environment and a concern for sustainability is ingrained in our company culture. Quite apart from this, we also need to measure up to the high expectations of all our stakeholders.”

He adds that clients increasingly have ambitious goals when it comes to sustainability and environmental care and Concor takes cognisance of this. Additionally, the company – like any other contractor –has to comply with the National Environmental Management Act (NEMA), which constitutes an entire family of laws, as well as other relevant legislation.

“Basically, any reputable contractor these days will have to show a high level of environmental awareness and have a real commitment to sustainability in order to operate successfully, so the business case for being strong in these areas is overwhelming,” he says.

Concor, of course, is a member of the Green Building Council South Africa (GBCSA) and has been responsible for many high-profile green building projects, both in South Africa and across border, which have been recognised under the GBCSA’s Green Star certification system.

According to Paul, the Menlyn Park refurbishment – completed several years ago – exemplifies what green building means in practice. “As regards materials, post-consumer recycled reinforced steel was used while the ordinary cement in the concrete was reduced by 30 % through substitution with fly ash,” he says. “Also noteworthy was a reduction of potable water consumption of around 30 % compared to what would normally have been expected on a project of this size and type.

“Recycling, of course, is an important principle of the green approach and a high level of recycling was achieved at Menlyn Park with more than 70 % of waste being repurposed.”

Further afield, in Qatar, Concor built the Qatar Science & Technology Park, which achieved a LEED Green Building under the Core and Shell Gold award. LEED (Leadership in Energy and Environmental Design) which is the US equivalent of South Africa’s Green Star certification system.

Commenting generally on green buildings, Paul says they cost less to run, produce less greenhouse gas emissions, use energy optimally and are easier to insure and hold value longer. “These factors appeal to developers and building owners, and we are seeing more clients insisting on their buildings being green. My own view is that the future of large projects in the construction industry really depends on designers and contractors being knowledgeable about green construction processes.”

Green construction principles can, of course, be applied outside the commercial building field and Paul says Concor is particularly proud of the work it has done on wind farms around the country which are generally situated in environmentally sensitive locations. He points to the Roggeveld Wind farm in the Western Cape – which recently entered commercial production – as a particularly fine example of what can be achieved.

“We were responsible for a portion of the civils work, which included turbine bases spread over a construction footprint of 40 ha,” he says. “The site is situated on Central Mountain Renosterveld, which is home to unique species such as Brunsvigia josephinae and other red data species. The design footprint of the project mapped the localities and accommodated them. Where this was not feasible, search and rescue exercises were conducted and retrieved plants were relocated elsewhere on the property.”

Protecting and translocating protected species was also to the fore on the Loeriesfontein, Khobab and De Aar Wind Farms in the Northern Cape and the Jeffrey’s Bay Wind Farm in the Eastern Cape, among others. An interesting feature of the Khobab project was the use of specially designed concrete mixes which reduced the site’s construction carbon footprint from approximately 300 kg of CO2 per cubic metre to just 90,7 kg of CO2 per cubic metre, dropping the project’s overall carbon footprint by 31 %.

Many high-profile bridge and road projects have also provided platforms for Concor to display its skills in environmental care. It was the main contractor, for example, on the Mtunzini N2 road upgrade, which was opened in 2019. This involved the construction of a new highway crossing the uMhlathuze and the uMlalazi rivers and traversing 22 wetland systems. All wetland aspects affected such as unique plants and soils were either temporarily sealed off from the works and removed for later reinstatement.

Finally, no mention of Concor’s skills in the environmental field would be complete without reference to one of its most prestigious current contracts – the construction (in joint venture with Mota-Engil) of SANRAL’s Msikaba Bridge in the Eastern Cape which will span the 220 metre deep Msikaba Gorge.

The civil engineering challenges on the project, which include working at heights of up to 128 metres (the maximum height of the bridge pylons), are formidable but Concor and its partners have also been responsible for rescuing nearly 15 000 threatened and protected plant species and translocating them to on-site holding nurseries. The plants have subsequently been replanted at carefully selected sites near the bridge.

“We have also had to consider the sensitivities of a colony of rare Cape vultures,” says Paul. “The Cape vulture, also known as the Cape Griffon, was listed in 2015 as a regionally endangered species. Measures included paying careful attention to blasting operations to limit disturbance to the colony, particularly in the breeding season.”

Paul believes the attention to environmental concerns displayed on the Msikaba Bridge project will become a benchmark for the civil engineering industry. “The engineering that’s going into the bridge is amazing but the project is also a landmark in terms of the environmental care that is accompanying construction activities. It shows that construction can be carried out very successfully and with low impact in even the most sensitive of environments,” he concludes. 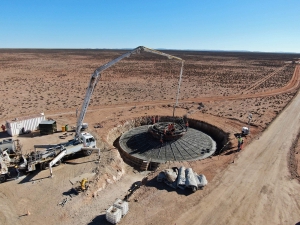 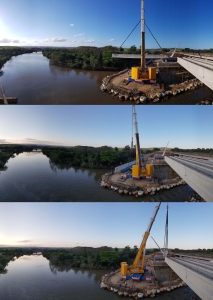 Construction and upgrading of the N2 by Concor saw geotextile sandbags placed to form a coffer dam to protect the estuary from contamination. 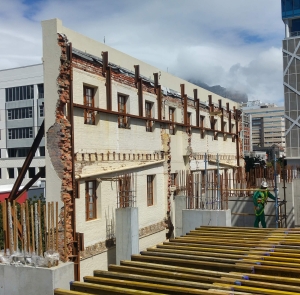 Viewed from inside the 16 on Bree site during construction, the specialised steel bracing used to preserve the 200-year-old façade wall for heritage is visible. 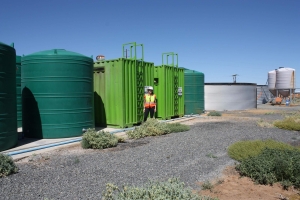 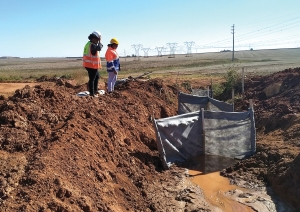 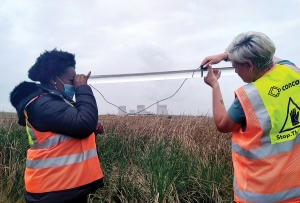 Water turbidity assessment prior to release on a project. 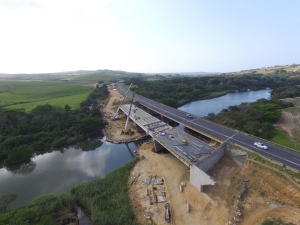 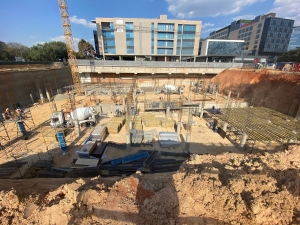 Once completed, the Ikusasa building at the Oxford Parks precinct achieved a 6 star Green Star in terms of the GBCSA Green Star rating. 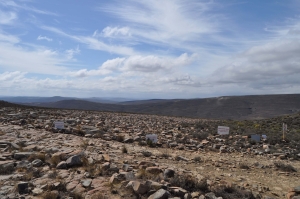 One of the environmental No-Go areas at the Roggeveld Wind Farm situated on Central Mountain Renosterveld in the Western Cape.